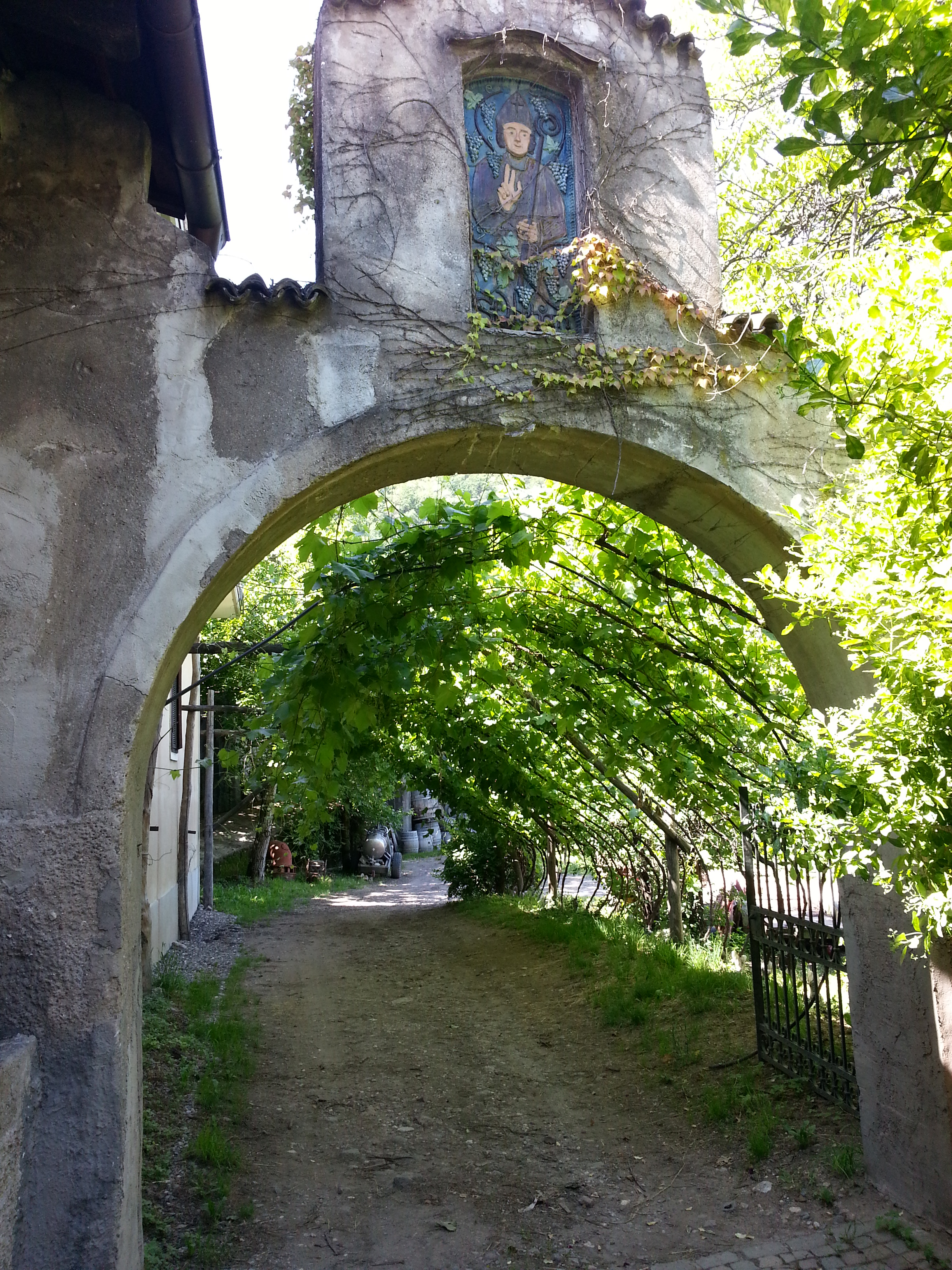 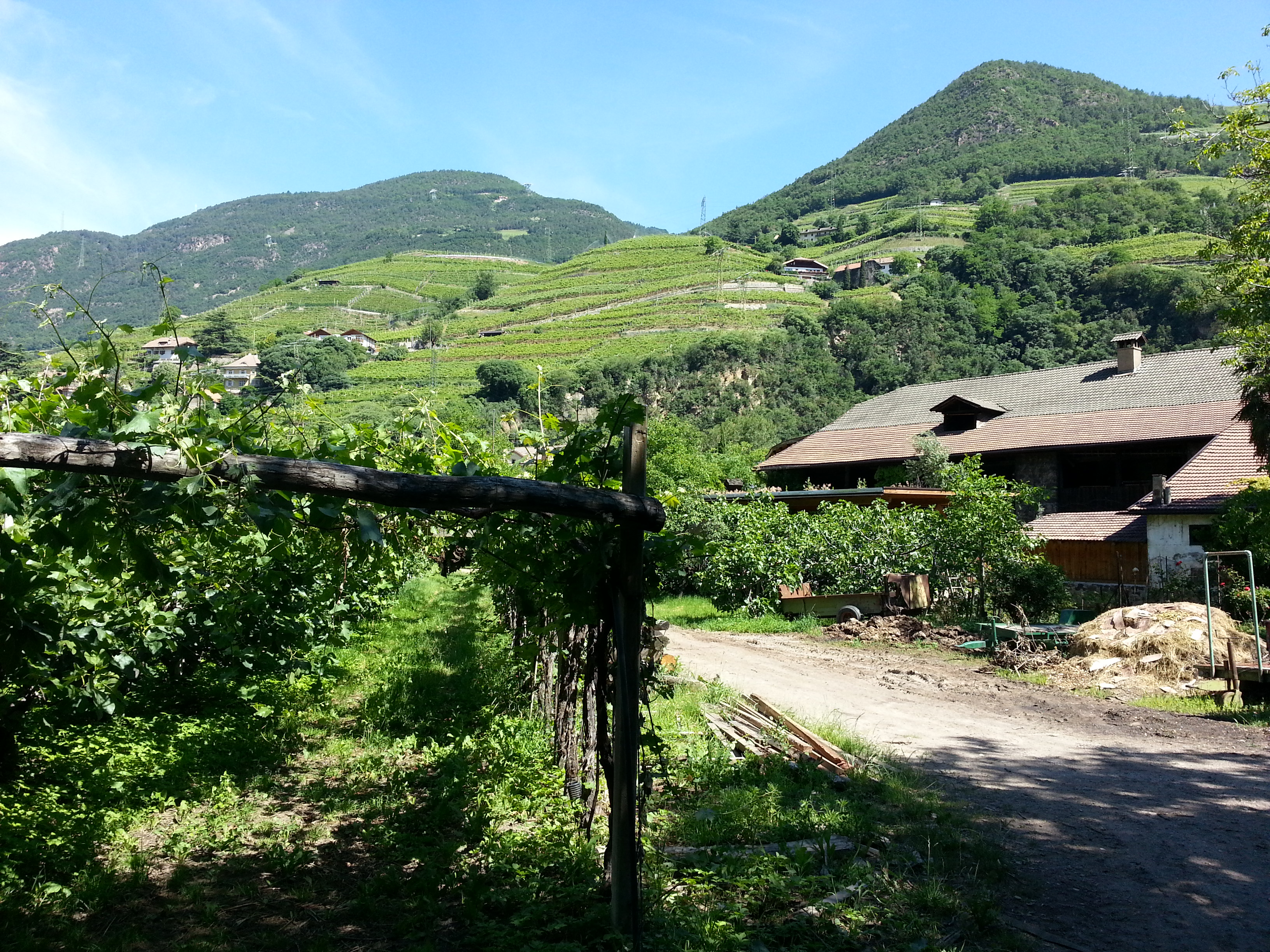 Guten tag ancora in Italia?
In the Dolomites of Alto Adige in Italy’s northeast, just east of Bolzano where the mountain walls narrow into a steeply sloped valley, flows the Eisack (German)/Isarco (Italian) river.  At the mouth of the valley on either side of the river lies the village of Kardaun/Cardano, whose dramatic terraced vineyards serve as a triumphal announcement of one’s arrival to the mountains.  The millennia of erosion and sedimentary runoff has left the soil on these riverbanks terribly rich in mineral content, in particular its high percentage of well drained volcanic porphyry soils. It was here in Kardaun in 1629 that the first Mayr family settlement was installed with the purchase of the riverside Unterganznerhof farmstead.  Passed down for ten generations, this farm has produced fruits and produce of many varieties; however, the one that is the most legendary is that of the rich red wines they have made from the unique native Lagrein and Schiava……
Lagrein is a Sudtirolean grape with genetic links to Pinot Noir and Syrah, but most closely that of Trentino’s Teroldego.  Its classical flavor profile is something along the lines of a full-bodied, tannic, deeply fruited wine in the vein of a Cabernet Sauvignon, but with higher acidity and a more prominent earthy character.  New York Times wine writer Eric Asimov described the variety as producing, “congenial, straightforward wines that can be deliciously plummy, earthy and chewy, dark and full-bodied but not heavy, with a pronounced minerally edge”.
Schiava, also known as Trollinger in Germany (from the mispronounced “Tirolinger”, or “of the Tirol”), is the grape variety found on the steep slopes of the St Magdalener hillside; it too is native to the Sudtirol.  It produces wines that are pale and strawberry fruited, with a lovely smoky spiciness.  It has its own DOC designation, the only such in all of Italy for Schiava.  If a wine has the name St Magdalener DOC on the label, it must be from these hillsides and contain at least 90% Schiava, with the balance being either Lagrein or Pinot Noir.
Today, from these elements geological, genetic, and cultural, Josephus and Barbara Mayr proudly continue the traditions of their ancestors while selectively adopting the strengths of modern viticulture.  The images above are first the entrance to their flatland Lagrein vineyards, and second a view of from the Lagrein vineyards looking across the river to the terraces of the St Magdalener DOC.  As you will notice in the Lagrein vineyard, the vines are trellised in a pergola style, that of an overhead canopy.  Josephus uses this age-old technique for virtually all of his red wines, which maximizes canopy sun exposure while shading the fruit AND preventing frost issues.  There is a systematic 50% green harvest, which dramatically limits yields, ensuring better fruit quality; such a choice would have been unheard of two generations ago…..Harvest usually takes place in early to mid October for the reds, which allows for a very long growing season.  The naturally high acidity of Lagrein and Schiava preserves freshness, while the constant dry and cool mountain/river breeze prevents the onset of any moisture based maladies, one of the principal challenges in grape growing.  This ripe fruit density with good acidity makes for a succulent combo……Vinification is also a blend of the modern and the ancient, benefiting from stainless steel precision and purity for maceration, followed by malolactic in traditional large neutral fuder and an assortment of burgundy sized demi-muids.  Josephus has always maintained an open minded approach to barrel use, experimenting with all sorts of wood types, including Pennsylvania wood (which he doesn’t like…) and home made Hungarian/Slovenian oak barrels.  The desired end result is clear: a balanced and complimentary role for wood, to more prominently feature the fruit and savory elements of the wine rather than the aging vessel….
The Mayr Lagrein based wines are without question the most celebrated expressions of the varietal in all of Alto Adige.  The domaine has very rarely exported anything to the USA, as the steady knocking at their cellar door from European clientele is more than sufficient to sell everything that they make (at a higher profit, no less).  Their Lagrein Riserva has taken the Gambero Rosso’s Tre Bicchieri prize more than any other Lagrein based wine, period.  Its rich and savory driven elements are perennially swoon worthy.  Their Reif wine, a Bordeaux styled blend of Cabernet Sauvignon, Merlot, Petite Verdot, Cabernet Franc, and Lagrein has a polish and depth that is terribly satisfying, offering both a hedonistic and earthy appeal allied to wonderfully noble, fine grained tannin.  And perhaps the most unique and cultish wine that they produce is an Amarone styled wine of Lagrein, which they call Lamarein, made from grapes that are air dried for approximately 90 days on the well ventilated upper floor of the barn you see pictured here.  It was this wine that was my first introduction to the domaine over a decade ago; I had purchased two bottles of the 2000 Lamarein on the recommendation of a passionate wine merchant in the neighboring Val Badia.  In both youth and a decade later, the wine was absoultely mesmerizing, an ideal interplay of fruit of savory complexity.  This wine sells out every year on a reservation basis well before it is even bottled; the steady stream of visitors and tourists plead for an allocation of a single bottle or two, and are dismayed to be told to get in line for next year…….I am unable to offer any of the current 2011 vintage, with reservations being taken now for next June’s release of the 2012.  If ever there were a wine that captured the elemental majesty of this dramatic mountain landscape, this would be it…..
AND THE WINES!:

2012 St Magdalener Klassich $22
“The estate’s St. Magdalener Klassich is all class and elegance. Ripe red cherries, flowers, tobacco and sweet herbs are all woven together beautifully. The 2010 is all grace and effortless in personality. This is about as good as St. Maddalena gets.” 90 points Antonio Galloni for the 2010 vintage

“The estate’s 2006 Lagrein Riserva a big, jammy wine bursting with blackberries, wild herbs, game and licorice. This brooding, intense Lagrein reconciles superb concentration of fruit with tons of Lagrein typicity in an intense, mineral driven style. Ideally the wine needs another year or two to tame some of the edginess that is present at the moment, but this should be a gem in a few years time.” 93 points Antonio Galloni for the 2006 vintage

“The 2007 Composition Reif is a unique blend of Lagrein, Cabernet Sauvignon, Cabernet Franc, Merlot and Petit Verdot aged in French oak. It is a gorgeous, sweeping wine loaded with dark fruit, sweet herbs, spices, cassis and minerals. Medium to full in body, this refined red offers tons of balance and harmony, with a round, caressing finish that invites a second taste.” 93 points Antonio Galloni for the 2007 vintage

“The 2009 Lamarein is one of the most unusual and compelling reds being made in Alto Adige today. The grapes are dried for several months Amarone-style before being vinified, resulting in an unusually rich expression of Lagrein. Sweet dark berries, flowers, minerals and spices are just some of the notes that flow from the glass as this beautifully delineated wine shows off its compelling personality. The combination of opulence and freshness is striking. Sweet floral notes wrap around the plush, headspinning finish. This is a dazzling effort from proprietor Josephus Mayr. Once again, Lamarein is one of the most distinctive and flat-out delicious reds from Alto Adige.”94 points Antonio Galloni for the 2009 vintage

I am delighted and honored that the Mayr’s have chosen me to represent them.  Once you all get a chance to taste, you’ll see why…..I’ve waited many years for this moment.  The satisfaction of moving from inspiration to hand in hand partnership is a beautiful thing…..
As always, with any questions or interests: rob@downtoearthwines.net
TO BARBARA AND JOSEPHUS, AND THE ENDURING TRADITIONS OF THEIR ANCESTORS!
CHEERS!
rp
robertpanzer2018-08-18T17:56:21+00:00